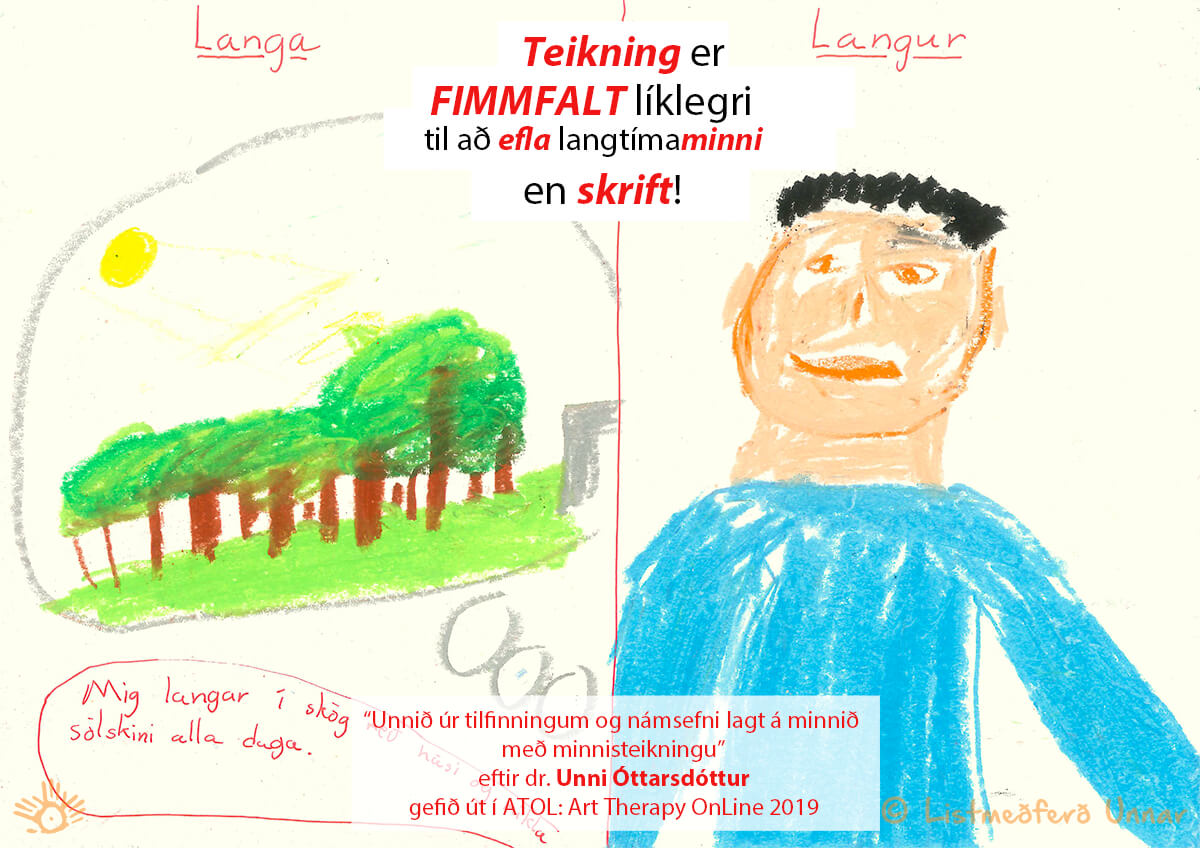 Dr Unnur Ottarsdottir, art therapist, teacher and artist, will be hosting free webinars on “Processing Emotions and Memorising Coursework through Memory Drawing”, in which research findings about drawing and memory will be introduced. The webinars are open to everyone interested.

The research was conducted by Ottarsdottir in two related parts. One hundred and thirty-four subjects participated in the part of the study where they were asked to draw the content of certain words and write other words down. Some subjects were asked to remember after three weeks what they had written and drawn, and others after nine weeks. In both cases, words that were drawn were generally recalled much more successfully than words that were written. Drawing was generally as much as five times more effective then writing when recalled nine weeks after the original memorisation. To the best of knowledge, research regarding such long-term memory of drawings has not been conducted worldwide, prior to now.

In the other related part of the research, Ottarsdottir conducted a qualitative study with five children who had experienced stress or trauma and had specific learning difficulties. The children drew pictures partly to memorise coursework material. Indications were found that such drawing could facilitate processing of emotions associated with difficult or traumatic experiences.

Art therapy theories and methods were found to be important in order to understand the memory drawing process. It appears that drawing, in art therapy, provides sufficient safety so that the children often manage to express vulnerable and complex feelings more easily through drawing than they do through speaking. The memory drawing research is contextualised within the literature on related research studies, methods and theories.

Participants in the webinar will be invited to take part in a drawing/writing exercise which explains the way in which the quantitative part of the research was conducted. The exercise provides insight into the functions of memorising through drawing and writing.

Ottarsdottir is available for giving lectures on demand, about the memory drawing. To schedule a lecture, contact her through email unnur@unnurarttherapy.is or by phone at 00354 8670277. The full paper on the research, “Processing Emotions and Memorising Coursework through Memory Drawing”, was published in ATOL: Art Therapy OnLine, and can be viewed here.

Ottarsdottir will be hosting webinars.

Timing of the webinars will be announced later.

Attendance to the webinars is free and open to everyone.

Björg Stefánsdóttir, student in Museology at the University of Iceland, art professional and former director of the Icelandic Art Center.

"I was spellbound after Unnur‘s webinar on art therapy and her account of her research, I found it very impressive and interesting to partake in the experiment we did during the lecture, and my own results really came as a surprise to me. As the lecture is two hours long, I found it good to get a ten minutes break after one hour, as you don‘t need to be stressful that you might miss something if you need to use the bathroom or just grab a cup of coffee. Thank you so much, Unnur, for the information and for a good time."

"Unnur facilitates her webinar gracefully, is exceptionally well organized, and shares knowledge that can immediately inform one's life personally and professionally. It was to me an intellectual coming home - a rarely struck harmony of theory and practice."